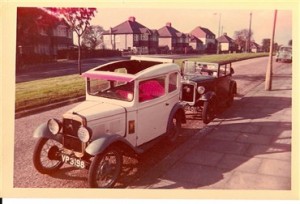 Reggie makes new friend in South London in 1967 – it was considered very fetching to be painted in white emulsion and have fluorescent pink sun visor!

I passed my driving test on Tuesday 16th May 1967 and knew exactly what I wanted – my best mate had an MG TA and we used to have a lot of fun round the lanes of north Kent – so obviously it was just what I needed. I went off to see an MG advertised in the local paper for £60 including supercharger…and joined the queue – yes it was sold! So it was the Exchange & Mart on Thursday 18th where I saw a 1934 2 seater Austin 7 which seemed  reasonable at £55. Hmmm..bit older than I would’ve liked but it was just down the road from college in Catford so I went round to see it in Forest Hill during my lunch break, agreed the asking price subject to MOT (the Ten Year Test – for steering and brakes but not for cracked windscreens unfortunately). I didn’t know much about Austin Sevens except from a school pal Alan Rablah who used to come to school in a Ruby – (he was to become Alan Raeburn at a later date and many of you will have known him from his racing spares service – sadly he is no longer with us but Lois still attends Beaulieu with a stall)
So, MOT secured, Reggie (the husband and wife previous owners were actors and advised me that was the name of my new friend) was mine and I proudly drove home on 19th May 1967. My mother saw me arrive from the window of our flat and said ‘what has he done now?’ (yes I did have a habit of bringing strange things/people home but I guess that’s another story). Admittedly Reggie was probably not at his best but he was pillar box red and he had 4 wheels (my previous wheels being a Heinkel 3 wheeler – with reclining seats and go faster stripes. 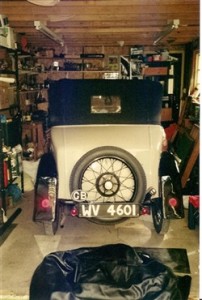 “Don’t you ever do that to me again, Trevor”

My girlfriends have never been great enthusiasts of Reggie. The early days were the worst ‘Why don’t you buy a nice Mini?’ …she had to go… ‘why don’t you buy a nice Morris 8 like the one over the road?’ she went. I spent the summer with filler, fibre glass and plastic padding and repainted him a very tasteful maroon – most suitable I thought for my years at posh Bath University.
We became inseparable and – I note from the ‘log book’ my Dad gave me, that on the 21st May I treated him to 2 gallons of petrol at 5/1d a gallon…I fitted a 2 bearing engine supplied by Alan Vallance on 1st March 1968 ….I finally replaced his broken windscreen on 1st December 1970 .. there was much commuting between London, Folkestone, Liverpool, Kidderminster, Devon and Bath …on 14th December 1971 I rebuilt and fitted the engine courtesy of Kirby Wiske…toured Scotland in September 1973, ah the midges, the midges!

I went to the USA in 1975 and Reggie went to stay in a friend’s garage ‘for a few months.’ Months turned into years and eventually home ownership – provided there was space for a garage! The next 19 years seem to have been spent building garages and the ground up restoration of Reggie. Eventually I had to ask Dave Williams to finish the job! He did it expertly of course and with upholstery and hood by Dave Nightingale he was at last back on the road in 1994 and won the First Class award at Beaulieu – he was so proud he blew a core plug on the way home! Since then we’ve had an annual holiday with my pal Dave Pearce to Ireland, Spain, France, Wales and JOGLE in 1997. In 2007 we planned to go to West Wales – to be named the ’40th Anniversary Run’.
(I mentioned this to Jen Dunford who said ‘how about a bit about your hols with the Seven for the Newsletter?’ – so if you’ve got this far it’s all her fault- I’m not known for sharing blame)
However, the holiday didn’t quite work out as planned – hence this extended ‘Life with Reggie’ story. 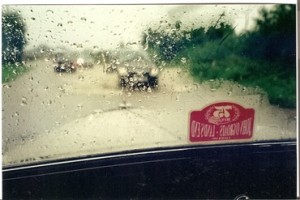 First I was asked to go in for a long awaited knee operation the week before our scheduled first day. ‘You wont be able to drive for week’ – no problem, Dave can drive for the first few days. Second, the trip should’ve been named Wet Wales. To cut a long story short, severe weather conditions were forecast for Friday 20th July and yes it was raining as we set off and, yes, there was rain coming through the ceiling of the cafe where we stopped for lunch in Nailsworth and, yes, the A40 going east round Gloucester was under water but, hey, we were heading west – “I know,” I said “lets take that nice B road, much more fun”….OK through the first lot of floods although Reggie did cough once or twice and into a garage to dry out where they advised that there were more floods at Newent – ‘You wont get through’  – huh, what do they know?

Reggie can go anywhere – he got through those other floods OK (just). However all we ever saw was a long queue of traffic and people at the front coming back so we did the same and through the higher floods now and back on to the A40 going east – did I mention it was under water? We resolved to get a room in Gloucester for the night if we could – little realising that was everyone’s plan! –  this was the beginning of the floods which would deprive Gloucestershire and Worcestershire of water and power for weeks… all we had to put up with was no dinner (but the beer was still flowing)…
Next morning was dryer and we decided to call it a result and have our holiday later  and so back to home where Reggie was very grateful to get back in his snug little house… 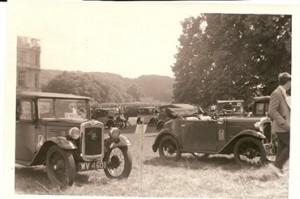