Sri Lanka may hold key to coping with climate change 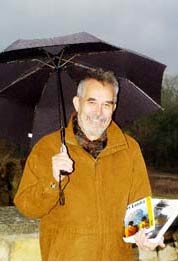 WITH global warming threatening to bring a monsoon climate to the United Kingdom, a Bradford on Avon man is travelling to Asia to find out how our water systems would cope if the predictions come true.

He has been awarded a bursary through the Winston Churchill fellowship scheme to study Sri Lankan water management systems and see how the UK could adapt if global warming predictions come true.

The storm deluge which devastated the Cornish town of Boscastle in 2004 has led to an increased need to examine how the UK would cope if violent storms and flooding became the norm.

Dr Turpin, an environmental planner with Nicholas Pearson, was awarded £3,500 for his five-six week trip, which will include meetings with water board officials in Colombo.

He said: “I am concerned there is going to be a change in climate and if we can implement methods of mitigating by design or management through our water systems, that might be of interest to the Environment Agency and local authorities.

“Water companies in the UK are concerned about climate change and the Environment Agency is worried as far as flooding is concerned.

“There is a sensitivity to the environment as there is here. They have very dry periods and the predictions is we will have too. But there will also be the storm events, like in Boscastle.”

Dr Turpin, who spent 11 years working for Wessex Water, will also visit a triangle of three ancient cities in Sri Lanka which still use a water storage system dating back 2,000 years.

“I understand the ancient systems are still being used for irrigation and farming,” he said.

“They have a system of tanks, reservoirs, embankments and so on, so there is something worth investigating.”

The Winston Churchill Chance of a Lifetime fellowship was set up after the former Prime Minister’s death, funding people to travel and gain knowledge and experience of use to the UK.